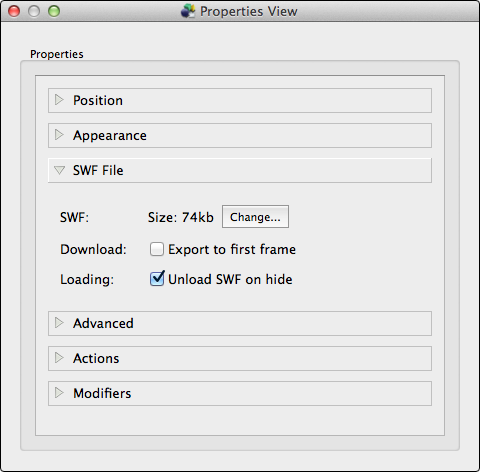 ID: Give the SWF a unique ID or name.

Position: The x and y coordinates for the SWF file. This field is also visible (and editable) in the Editor Panel.

Size: Adjust the SWF’s size (width and height) in pixels.

‘Scaling: Scales the SWF along the x and y axes. Doubling the value on either axis, for instance, will double the size of the element. If a scaling modifier is enabled, this scaling setting is ignored.

Visible: Select or deselect to keep the SWF visible or invisible. Visibility or invisibility can be changed and toggled with actions.

Alpha: The transparency of the SWF. A setting of 1.000 is opaque. Lowering this number will increase the SWF’s transparency.

Hand Cursor: Select to have the hand cursor show when the mouse rolls over the SWF. This makes it more obvious to the user that the area or SWF is interactive.

SWF: This option shows the size of the SWF and gives you the option to change the file.