Use modifiers to affect a skin element’s behavior. 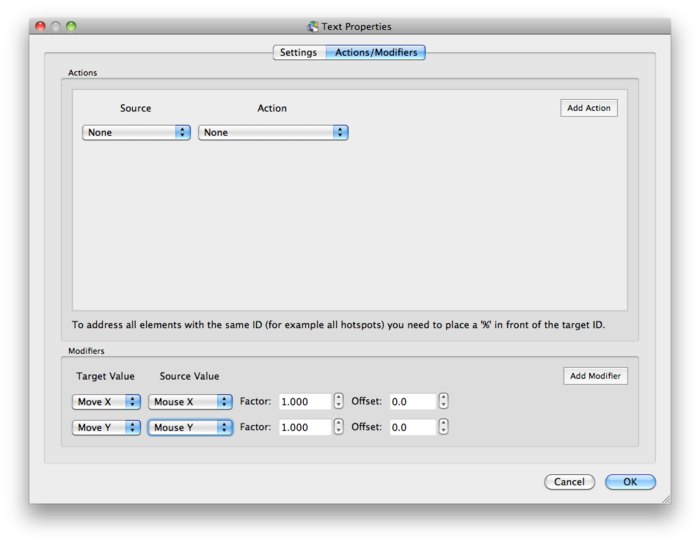 Skin Editor Modifiers. The modifiers in this image will cause an element to move with the mouse.

Target Value is what the element will do (move, scale etc.).

This will move an element along the X axis.

This will move an element along the Y axis.

This will scale an element’s size along both the X and Y axes.

The will scale an element along the X axis only.

The will scale an element along the Y axis only.

This will rotate an element.

Source Value determines what action will generate the values used by the Target Value.

When the object is panned the resulting angle data will affect the Target Value.

For example, add this to the target value, Rotate, and the element will rotate as the image is panned.

This could be used show direction.

When the object is tilted up or down, the angle of tilt is sent to the Target Value.

For example, use this with the target value of Move Y, and as the object tilts up and down, an element would also move up and down.

When zooming in or out of an object, the FoV data is passed on to the Target Value.

If Move Y is the target value, as you zoom in and out, the element would move up and down.

Example: use to give a visual indication of level of zoom.

This source value is commonly used with Scale Y when making radar beams. When the object tilts up and down, this scales the beam so it looks as if the beam moves up and down.

This source value is to be used with the Scale Target Values. tan(FoV) changes the scale of an element with regards to FoV (zoom).

For example, when used with Scale X, tan(FoV) will adjust the width of a radar beam when zooming in and out.

This will scale the element relative to FoV (zoom).

For example, add this to a Hotspot template and as you zoom in and out, the hotspot will get smaller and larger.

Commonly used with Move X to have an element follow the mouse along the X axis.

Commonly used with Move Y to have an element follow the mouse along the Y axis.

TIP: When using 1/tan(FoV) to scale an element with zoom, you may need to adjust the factor to correct the element’s size.

If something is not the correct size or direction, use this to make adjustments.

TIP: When used with rotate with pan, use this to correct the starting position.