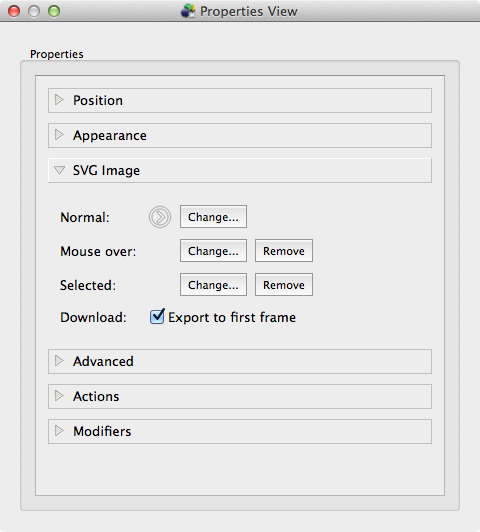 Position: The x and y coordinates for the SVG.

Size: Adjust the SVG’s size (width and height) in pixels.

‘Scaling: Scales the SVG along the x and y axes. Doubling the value on either axis, for instance, will double the size of the element. If a scaling modifier is enabled, this scaling setting is ignored.

Visible: Select or deselect to keep the SVG visible or invisible. Visibility or invisibility can be changed and toggled with actions.

Alpha: The transparency of the SVG. A setting of 1.000 is opaque. Lowering this number will increase the SVG’s transparency.

Hand Cursor: Select to have the hand cursor show when the mouse rolls over the SVG. This makes it more obvious to the user that the area or SVG is interactive.
Image: This option shows the SVG image and gives you the option to change the file.

Normal: This is the normal state of the image – how it appears with no interaction. Click Change to replace the button image.

Mouse over: This is the image for the over state. Click Change to replace the image or Remove to remove it completely.

Selected: This is the selected state image. If no image appears, it means no image has been selected for this state. Click Change to replace the image or Remove to remove it completely.

Download: Select Export to first frame. to have the image on the first frame of the movie.