The image properties window will give you the ability to change the current image. 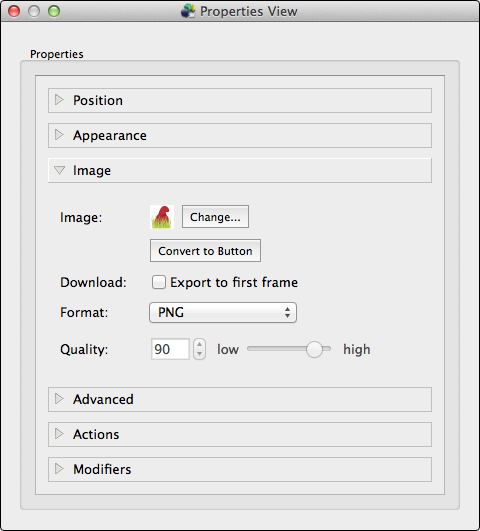 ID: Give the image a unique ID or name.

Alpha: The transparency of the image. A setting of 1.000 is opaque. Lowering this number will increase the images’s transparency.

Hand Cursor: Select to have the hand cursor show when the mouse rolls over the image. This makes it more obvious to the user that the area or image is interactive.

Image: This shows the current image. Clicking Change will let you pick another image.

Download: Select Export to first frame, to have the image on the first frame of the movie.

Format: Choose which format (PNG, JPEG with Alpha or JPEG) the image should be converted to. If you do not want the image to be converted, choose the image’s original format.

Quality: When JPEG is chosen as the format, you can adjust the quality of the image here.